At a time we were learning to negotiate, one of my sisters approached my mum to ask her for a salary.

But you don’t work for me was my mums way of thinking.
In any event she and dad decided, that we the children, would get some sort of pocket money for doing small chores around the house- one of my very first relationships with money!

So money was earned in exchange for providing a service.
A particular story sticks out in my mind.

My younger brother was running an errand for one of my sisters. He was asked to buy sweets for 10kobo (like 10pence in English currency) but he came bearing sweets that cost 6 kobo!

He added that he had charged 2 kobo either way for his troubled to and from sweet shop – another lesson in paying for a service. So if the buyer was too busy to go to the shop, they could pay someone else to do it for them. Period.

Back to adult times…

It was fun to work when I was flying solo and apart from volunteering at Hillsong at weekends, it was so rewarding to earn my own money. I moved into different roles in health, communications and government – like someone on an adventure.

That changed when I got the ‘mrs’ degree and changed surnames.

My siblings and I 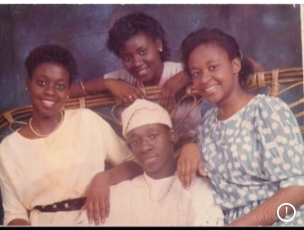 After giving up work when about to have my first baby I kind of learned how to maintain my sanity and keep the mind alive by enrolling for distance courses with the Open University – an exciting experience. I would play course tapes and videos in the house continuallly just to assimilate information. I even had to do my exam at home because I was heavily pregnant with the third child then.

Well I had been a stay-at -home -mum for 7 years with some periods of part-time work but never full time. I recalled overhearing a conversation at lunch whilst I was at work, whilst pregnant with the third child (I lost second one whilst on a missionary trip with their dad in the US- another story).
She was telling a friend that when one person worked it put enormous financial pressure on their relationship. That struck accord with me and strengthened my resolve to pursue some sort of financial freedom. Somehow working and rearing children proved problematic as my earnings were going on childcare, travel, work lunch and more as you will appreciate. I feared that if I stayed at home I would be ‘brain dead’ or lacking in some independence.
Since my going to work was causing much in terms of arguments, tension, childcare costs and more, I gave it up whilst pregnant with third child.

Ise loko obinrin in ‘Yoruba’ means that a woman’s husband is her work. That’s what my late nurse friend said while I was toying with idea of pursuing a career (to the exception of enjoying other aspects of living). That stayed with me for a long time.

So work is priority then?

Later a representative role with. Avon cosmetics provided a reason to get out of the house!

It all started like this…
One day I was climbing up the stairs in our home and noticed how out-of-breath I was. Imagine me panting and sweating whilst climbing in our home. That became a wake up call to do something.

An activity to get me walking.

Cleaning the house was no longer as satisfying so it was good to find an activity that involved meeting people and bringing some surprises with delivery of cosmetics. It did not go well with my mum at all when I separated from the other party….later on. (That’s another story)

I quickly settled into the role of an Avon lady, amidst some arguments and misplaced reasoning at home. It gave me something to do – helping me holding on the sane need to connect with other people outside the four walls of our home.

With the young children quiet, I would sort out the customer orders, phone them to arrange delivery and then drop off the orders. It was such a treat to get some little income from this. I was getting too engrossed with the demands of the new role that I had  not noticed how much of a problem this was to the other party. Suffice to say, a different type of argument ensued, around who I was with, who I was seeing and why I had male customers?

On one occasion, I was followed as I pushed the baby’s pram, laden with customer orders and gifts. I thought how nice it was to have some help with travel and was fortunate to have a lift back home. It  soon emerged that that  was not the purpose of my “company on 4 wheels.”

To be continued Copyright ©Arinola 2017