On occasion, during half-terms, when we’re staying at with my dad we would go to up north to church and east, up until they moved venues to make room for the Olympics I wouldn’t ever spot the youth. When they moved to the east, every time I was there, on my way to a seat, I would see them, sitting on the stairs like ravenous birds of prey watching fresh meat walk through. I think they were mainly boys, my age or a year or two older. I dread to know what it would be like if I went now, with the way I look and dress now. 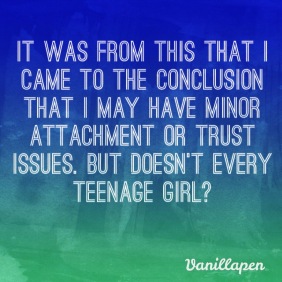 My point is, I wouldn’t be too comfortable, with what I’m going through now … A change in style, taste and body shape. The latter tends to severely restrict what I may wear on a normal day, half of my wardrobe remains un-used. These kids would probably look at me weirdly thinking “Who is she?”, “Where did she come from?”, and quite frankly, very few of them would know.

At my own church, despite being a very long standing member, I am quite a-social. This being in the sense that I don’t talk to too many people, and the sheer size of the church hindered any ‘popularity’ I could have had. I’m not really that type of girl though, as I don’t say to people if I can help it, and avoided gatherings, connect groups and the like. Yet, recently, having decided to be more ‘sociable’ or whatever the term would be, I endeavoured to attend every gathering and dinner party since February. So far, I have not missed many, and I have come to like the people I do life with at church. My point being, I am an introvert, but once I decide I want to talk and be social, boy am I just that. It was from this that I came to the conclusion that I may have minor attachment or trust issues.
But doesn’t every teenage girl?

I know that I find it hard to accept new people just like that, it’s something I am personally working on, without a therapist. I’m not a fan of shrinks. You talk for an hour, and they ask questions to which you already know the answers. You pay shed-loads to find out what you suspected.
Pointless? Right?
Back to me being an introvert. Sociologists may want to argue this may be down to the breakdown of my family and I may have felt that I had no-one to confide in…. Sure.
What if I didn’t want to confide in anyone?
I know that even now, I don’t tell my friends everything. I’ve learnt not to. Some things can be shared with people, but at the end of the day, as soon as you share a ‘secret’ with a friend, it is no longer a ‘secret’. This is common knowledge though. Anyway, so if I called you a ‘friend’ I meant it. I was never really mean or rude person when I was younger, that came with age, along with a temper. My temper took quite a while to properly develop.

I didn’t actually have any fights at school. When I was asked, I would say I didn’t believe in violence. That was true at that point. The reason why, I had found out that my mum may have been abused – Violence. The very word was ugly to me. I knew that my mum was always hurt after an argument and at one point her knee was bleeding. This was when we lived up North, and had an au pair, and coincidentally where I developed my fear of big dogs and encountered my first bee. 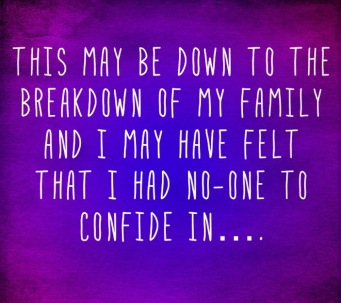 I had always suspected that there was some foul play, but I could never have known for sure. At this season in life I did everything I could to avoid fights, looking bad I did okay. I didn’t have any fights. But as I got older, I learned how to slap, and boy I no longer feared violence. Even now, I am not necessarily a violent person; I could deal some very hard kicks, slaps or punches in the back. But, my weapon of choice is my words, a very un-reliable weapon. Sometimes, words fail me, and I wouldn’t think, they just came out. I remember being in a few situations where I couldn’t think of a proper comeback until after the ‘cussing match’.
Other times, I would be in the zone, and would deliver an unbelievable melee of sharp words, and I was branded harsh. I still haven’t found the happy medium. Pray for me.
Having said all this, I don’t think I’m much different from any other teenager. Let’s be honest, teens are mean, and we know this. I’m not a rare breed. They’re moody, hormonal, bad tempered and rather sullen at the best of time.
Copyright ©Arinola Araba 2017